It’s a nonsense joke from 日常 which is a Japanese Animation/manga.
We call nonsense joke “nonsense gag”. (In Japan, the most common meaning of gag is joke.)
“yurushite” means forgive, but hyacinth has no meaning in that situation.

This is a nonsense gag and only fan of 日常 can understand this is “the nonsense gag”.
But I got some request about “ヒヤシンス” so I try to explain this.
If you don’t know about “日常” you can learn about Japanese comedy style through this article.

By the way, you can find this conversation in episode 20. 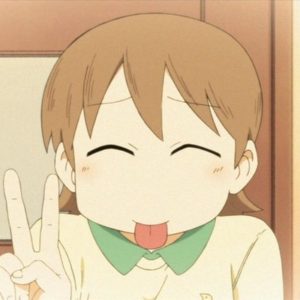 —
「許してヒヤシンス」
Forgive me hyacinth.
「ヒヤシンスどっから来たんだよ！」
Where is hyacinth from!
「それでも信じたよ、ちゃんと原稿用紙買ってきてるって！それがハードなギャグだって！」
I still trusted, you must bought the paper! It’s just a gag which is hard to understand!
「みおちゃん、頭をヒヤシンス」
Miochan, cool your head.

※
頭をヒヤシンス is also a joke which is easy to understand.
頭を冷やす(Atama wo hiyasu) means cool one’s head.
And the sound of “hiya” is same sound with hyacinth’s “hiya”
So she combined 冷やす(hiyasu) and ヒヤシンス(hyacinth).
—

What is the “nonsense gag”?

“Nonsense gag” is a one of Japanese comedy style.
In Japan, Basically, “nonsense gag” means short joke without meaning but sounds funny.

By the way gag means short joke or quick one-liner in Japan.

For Example… these are Japanese famous gag.
These gag style is “一発ギャグ(ippatsu gag)”.
Ippatsu means one shot, so ippatsu gag needs quick and funny movement.

On the other hand, nonsense gag style doesn’t need speed and meaning but sounds funny.
(Most of Japanese gag doesn’t have any meaning. Oh, I’m getting confused… it’s too difficult to explain!)

Yes… I thought it WAS a nonsense gag…

BUT someone find the meaning!!
Do you know the language of a purple hyacinth?
It is “please forgive me”!!!
WOW, IT HAS A MEANING!!!

The end of this article,
I want to explain again about “yurushite hyacinth(許してヒヤシンス)”.
It’s a “gag” from 日常, but it might be a “extremely high-level gag”.

Oh… It’s really hard to explain about “許してヒヤシンス”.
Can you understand?

>> ASK ME about Japanese something!
タグ: anime, owarai, request